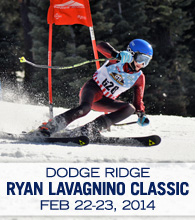 78 total U10 – U14 racers (ages 13 and under) competed in the second race of the Central Series this past weekend at Dodge Ridge.

Highlights of the weekend included 1st place sweeps Saturday and Sunday by four Dodge Ridge Race Team (DRRT) members in their respective divisions. For the girls, Alexis Ghiglieri won both U10 class races and Ava Law successfully won the U14 races and the boy’s side was dominated by the victories of U10 racer Iain Ferguson and his teammate Stash Perry in the U12 class. Other podium results for the DRRT ladies included Meara McCarthy racing to a 3rd place on Saturday and improving to 2nd on Sunday in the U10 races, and U12 racer Jensen Perry securing 3rd place both days just seconds behind Emerson Action who picked up 1st on both days in the girls U12. In the U12 men’s class Ethan Perry earned a 3rd on Saturday and Evan Lear did the same on Sunday while U14 racer Blake Action took the top spot on Saturday with Jake Kalia of Dodge Ridge following closely in 2nd and Tej Suklikar consistently finished in 2nd place on both days in the U10 class.

The Next USSA Far West Central Series race will be held at China Peak, March 1 & 2, followed by the final regular season race at Badger Pass on March 22 & 23, where the Dodge Ridge Race Team athletes will have the chance to secure the overall series team Championship and keep the Silver Cup at home for a fourth consecutive year.