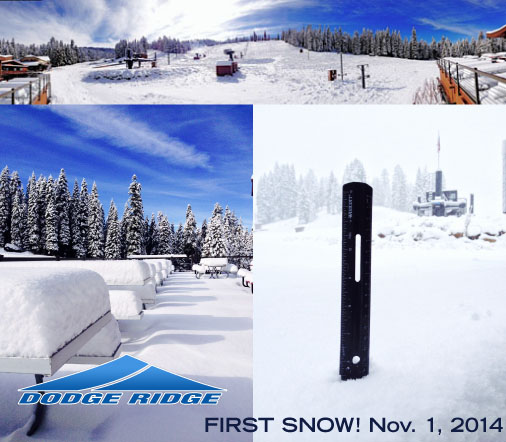 November 2, 2014 — PINECREST, Calif. – The fall of 2014’s first cold and snowy winter storm swept into the Sierra Nevada on Friday, October 31, and blanketed the slopes of Dodge Ridge with snowfall measured at 6 inches at the base area and over 10 inches at Dodge Ridge’s 8,200 foot summit. This early season snowfall was a very welcomed sight with the snow level as low as Twain Harte on Highway 108.

Every year the first snow kindles fond thoughts of the holidays ahead and just enjoying the change in the season, but for the winter sports enthusiast the first snow triggers dreams of thrilling days skiing or snowboarding on the mountain. Predictably, Dodge Ridge saw a jump in business as excited Dodge Ridge guests picked up their season passes, checked out the latest gear and dropped off their skis and snowboards for a tune-up before the snow really begins to fly.

As winter approaches and anticipation builds, Dodge Ridge is prepping the mountain to open as soon as possible. Most seasons Dodge Ridge opens in early to mid-December with the earliest opening in its 64-year history on October 30, 2004.

The Snow Bomb Ski and Snowboard Festival kicked off this weekend at Fort Mason in San Francisco and the Festival moves on to San Jose and Sacramento, CA over the next two weekends. Friends of Dodge Ridge who are interested in receiving free tickets to Snow Bomb should visit www.DodgeRidge.com for special offers leading up to the shows.