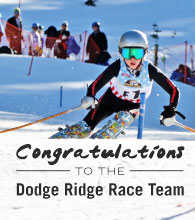 68 total U8 – U14 racers (ages 13 and under) got the Central Series Season
underway at Bear Valley this past weekend.

Highlights from the weekend include 1st place podiums in 7 of the 12 races across all divisions with nearly half of all 36 medals awarded going to the Dodge Ridge Race Team (DRRT).

The U8-10 (ages 9 and under) girls division was dominated by Alexis Ghiglieri and Avery Booth who took the 1st and 3rd positions respectively for both days of racing.  Alexis also captured the fastest combined and single run times in the U8-10 division for the weekend. The U8-10 boys division followed suit with Iain Ferguson picking up a 1st place finish Saturday, Owen Bartholow a 2nd on Sunday and Tej Suklikar holding the 3rd place position for the duration of the weekend.

U12 (age 10 & 11) boys took control as well with brothers Stash & Ethan Perry picking up the 2nd & 3rd positions respectively for Saturday along with a 1st place finish for Evan Lear and a 3rd for Stash Perry on Sunday who picked up his second medal of the weekend.  Evan Lear’s performance on Sunday also awarded him the fastest single run and combined times amongst all competitors in all divisions for the entire weekend.

Dodge Ridge’s U14 (age 12 & 13) division was just as successful with 1st place finishes by Ava Law on both Saturday and Sunday.  Ava’s solid finishes also placed her with the top single and combined times amongst all competitors in the U14 division for both days of racing.  In the U14 boys division, Aidan Ferguson also brought up the pack with a 1st place finish on Saturday.

Congratulations to all of the competitors from this past weekend whose competitive spirits continually push the sport of ski racing in a positive direction. A big thank you also goes out to Bear Valley for preparing the field and keeping the Rassmusen Classic on the Central Series schedule with additional recognition for the many volunteers from Dodge Ridge who provided 3/4 of the staffing necessary to support this event.  The next race on the Central Series Tour will be held at Dodge Ridge, February 22 & 23 as they host the annual Ryan Lavagnino Classic giant slalom event.  Races to follow will be at China Peak on March 1 & 2, Yosemite/Badger Pass on March 22 & 23, and finally moving on to the U14 Championships at Mammoth on March 27-30 and the U10/U12 Championships at Sugar Bowl April 3 – 6. Visit DodgeRidge.com for details.
See Race Results